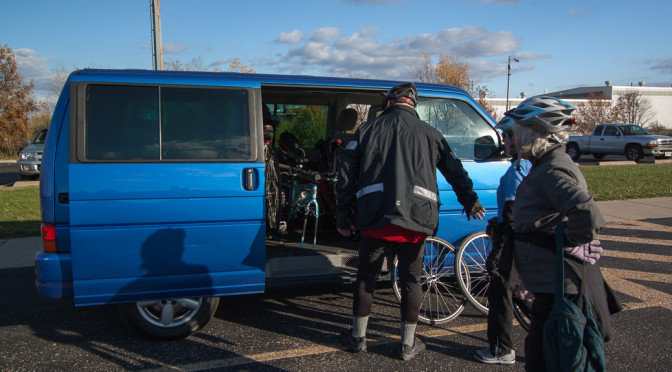 The I&M Canal offers many interesting and beautiful miles of riding. There are numerous options between Willowbrook all the way to the Joliet Iron Works. From Channahon to the end at Peru is well marked. It’s the portion between Joliet to Channahon that was unknown, that is until we took this ride on a beautiful Fall day.

The trail is well marked at Bradon on to Channahon, but it turned out to be a bit rocky due to some wet weather. Between the Joliet Iron Works to Bradon is pretty much city streets and traffic, especially once you cross over the river from the east side. There are locks at Bradon and what appeared to be a large parking lot, so perhaps a few options may be in order. Much of the I&M has been filled in or crossed for the sake of providing access to much of the industry that lines the sides of the canal. There are no services once you leave Bradon.

Even though I brought my DSLR, we thought that only the wide angle lens would be useful. Well, we have tons of pictures with the canal running from top to bottom and lamented that a telephoto would have been of greater value in catching the wild life along the ride. Also, with the trail in poor condition we limited our photo stops. There’s always a next time.